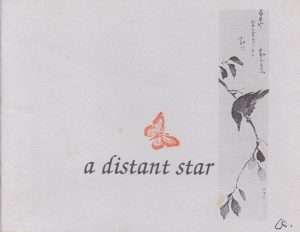 Anita Sadler Weiss is a familiar name to those in the haiku world, not least for the annual Anita Sadler Weiss Memorial Haiku Award. Besides being a well-known poet in her own right, she was a long-term teacher of the genre, and this volume (JoAtwater Publications, 1997) is a selection from workshops she gave at the Renaissance Institute from 1995-7.

a distant starAnita Sadler WeissBook of the WeekThe Haiku Foundation