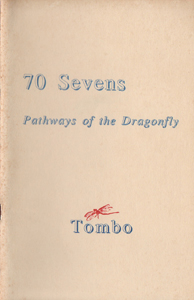 Lorraine Ellis Harr , or Tombo (the japanese word meaning “dragonfly”), was one of the leading champions of haiku in English in the earliest days of the haiku movement. In addition to serving as founder and president of Western World Haiku Society, she was a prolific author. Many of her books were theme-based, as this one (Middlewood Press, 1986), which features 7 poems each on 70 topics.