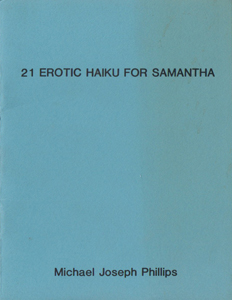 Michael John Phillips is one of the most enigmatic poets ever to adopt haiku as his main mode of expression. Throughout his series of half a dozen haiku chapbooks he alighted upon a single theme—female beauty, in its many manifestations—and explored it, sometimes with monotony, sometimes with flair, often with humor, but utterly unlike anyone else ever has.