Last February was the first National Haiku Writing Month (Twitter tag #NaHaiWriMo). The premise was simple—write a new haiku each day of the month. Organizer Michael Dylan Welch offered a variety of web resources, a homepage, a Facebook page, background information and writing prompts. The level of participation was left up to the writer’s taste.

For my level of participation, I chose to number each new poem and post it on the NaHaiWriMo Facebook page daily. This held me to a level of accountability, and gave me instant feedback on my creations in the form of “likes” and “comments.”

The trick to avoid writer’s block is simple, keep writing! It’s only when you prostrate yourself to intangibles like a muse or inspiration that you lose control of your faculties and become prey to insecurities, like “What if I get stuck and can no longer write?” 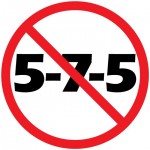 That’s where NaHaiWriMo comes in. Don’t believe me? Write me in March after you’ve taken part and written a poem each day!