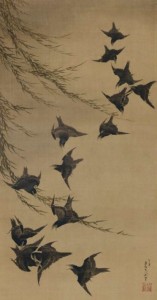 The Morning After: Haiku Faces a New Century

The received tradition of what is called haiku (in English) is not actually haiku as it exists in Japan, as Gary Snyder has recently indicated:

I do not think we should even ‘think’ haiku in other [than Japanese] languages and cultures. We should think brief, or short poems. They can be in the moment, be observant, be condensed and meaningful, detached or not, or have many other possible qualities. . . . As I am trying to say, the haiku is a Japanese poetic form. It has elements that can indeed be developed in the poetries of other languages and cultures, but not by slavish imitation. ( “News of the Day, News of the Moment: Gary Snyder talks with Udo Wenzel,” Haiku Heute (Summer 2007); my emphasis).

In Japan, haiku at root contain unique elements of linguistic, historical and literary context—complexities which have not been translated into English and are in general untranslatable. In English the haiku form, as we know it or have named it, has some unique and powerful features as poetry—some of these features are shared in common with gendai (contemporary Japanese) haiku. However, English-language haiku is an altogether different beast from that of the Japanese tradition—most closely resembling gendai senryû, not haiku. The differences are numerous. Among the most important issues, English has no pre-existing kigo tradition; no “season-oriented literary cosmos,” a millennial tradition fundamental as a linguistic and cultural precursor to the genre. Secondly, there has been no single poet composing haiku in English recognized as a leading light within the wider literary tradition—indicative of a great gulf, in terms of cultural significance. Thirdly, it is difficult to detect any innovative contemporary school, as seen in Japan, particularly since WWII, dealing directly with questions of haiku and social (and literary) relevance: shakaisei haiku (haiku of social consciousness) and zen’ei (avant garde haiku) being two important movements of the 1950s-60s, which have spawned revolutions in contemporary Japanese haiku.

Although English haiku do not possess a central connection to Japanese gendai haiku, qualities of presentation are shared (barring vocabulary). Having these shared qualities in the cross-cultural genre complicates the issue of verisimilitude. Japanese haiku and English haiku may be at most kissing cousins. As Snyder indicates, the term “haiku” itself is a misnomer in English, from a scholarly point of view. Haiku in English seems in the main to be a short-form poetics, with aesthetics and stylism influenced by the Japanese haiku (and its culture). However, the literary context and poetic approaches in English haiku are all located within the evolution and concerns of modernist western poetics.

Does this mean we should abandon the term “haiku”? I do not think so—yet for scholarship, the use of a pre-existing Japanese genre term for what is so obviously a unique and divergent genre in English requires disambiguation. While there is mutual magnetism and strong dynamic interplay between the two culturo-linguistic genre forms, further academic exploration may examine how uniquely different these two short-form poetics are; how they have arisen and are currently perceived in their respective cultural contexts. By clearing the air we can more precisely inquire as to the standing of the English-language haiku form within contemporary literature, in English.