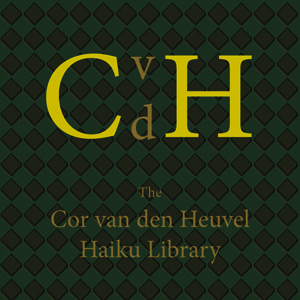 The Haiku Foundation truly enters into a new role of responsibility with the acquisition of the personal library, manuscripts, correspondence, awards and memorabilia of haiku pioneer Cor van den Heuvel. Part of the mission of the Foundation is to archive the history of the genre, and few figures have contributed more significantly to that history than Cor. In being charged to caretake his materials we have the opportunity to foster true scholarship back to the very beginnings of the Haiku Movement. Each part of the acquisition is worth considering in detail:

* The Cor van den Heuvel Library consists of Cor’s private collection of books which he considered seminal to the Western understanding and adoption of haiku. It consists of 112 volumes, including a nearly complete set of the Blyth volumes on haiku and related work; works of scholarship and criticism by Watts, Suzuki, Shirane, Ueda, Sato, Keene, Higginson and others; a selection of early important English-language haiku; books of translations of the Japanese masters; and other books that have contributed to the general growth of haiku in English. All volumes contain Cor’s personal annotations.

* The Cor van den Heuvel Archive contains the manuscripts to each of Cor’s many books, from his earliest Chant Press books through three editions of The Haiku Anthology, Baseball Haiku, and A Boy’s Seasons. Also included are manuscripts of books which have never appeared in print. Additionally, Cor’s haiku correspondence with hundreds of poets and scholars, including extensive interactions with most of the important haiku poets from the early 1960s to the present, is to be found here. Add to this Cor’s many and various haiku awards, photo albums, audio and video materials, personal journals, and memorabilia, and you can appreciate what a boon to future scholars and critics these holdings will provide.

* In addition to these substantial gifts, Cor donated another 200 books and 250 journals outside the provenance of the Cor van den Heuvel Archive to the The Haiku Foundation’s hard copy library.

We add these gifts to other holdings of the Foundation, notably some original calligraphy by Paul Reps donated by Susan Marie La Vallée in 2010. As a consequence, the Foundation has a substantial and growing collection which it plans to make available for scholarship purposes, and to preserve in perpetuity. We will be studying our options to make these holdings generally available in 2014 and going forward.

We hope you will consider donating your libraries and archives to the The Haiku Foundation. Contact us at https://www.thehaikufoundation.org/contact/ if you would like to discuss this.

The Haiku Foundation would like to thank THF Associate Cor van den Heuvel for his generous donation, and for the faith he has shown in our mission and abilities. We would also like to thank Thomas R. Borkowski, THF Treasurer and member of the Board of Directors, for his help in procuring these materials.

Please consider making a donation to The Haiku Foundation during our Fundraising Drive, November 28 – December 6. During this time only, every dollar you contribute is matched by an anonymous patron. Your money goes twice as far, and helps the Foundation continue its important work. Thank you.