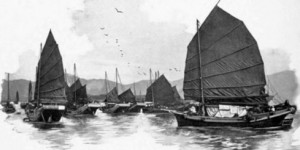 Sails is a section of troutswirl that is devoted to presenting questions for discussion and debate on the nature and possibilities of haiku. Sails is overseen by Peter Yovu. For an introduction to this section, see Sails.

Could I Ask You a Question Without Words?

Don’t be fooled: this Sailing is not, as promised, devoted to one-line haiku. We’ll get to that, but for now it seems that poor Viral 6.5 has taken on more than it bargained for, and so we have come in relief.

Can we bring the conversation about image-based and word-based haiku here? This includes the exploration of “the wordless poem”, and fingers with or without jewels. So how best to frame this, to bring it together in a way that picks up what has been scattered elsewhere and take it forward? Maybe we can start with something Michael Dylan Welch said:

So, like those layered acetate sheets that illustrate one portion of the human anatomy at a time, I’ll set down several questions. (And please improve upon any as needed or wished).

First, do you find this distinction between image-based and word-based haiku useful?

Do you have a preference, and why?

Can you give/show us a haiku which for you exemplifies “the wordless poem” as you understand it.

There are other questions which come up, but perhaps we have enough here to go on. I do want to encourage you to throw out some haiku for us to chew on. They help anchor the conversation, and this one may prove slippery, because when we are in the neighborhood of the “wordless poem” we tend to bump into paradox at every turn. But that, for many, may prompt the “argument with ourselves” that gives birth to haiku.